65% of doctors are getting cash “kickbacks” from big pharma 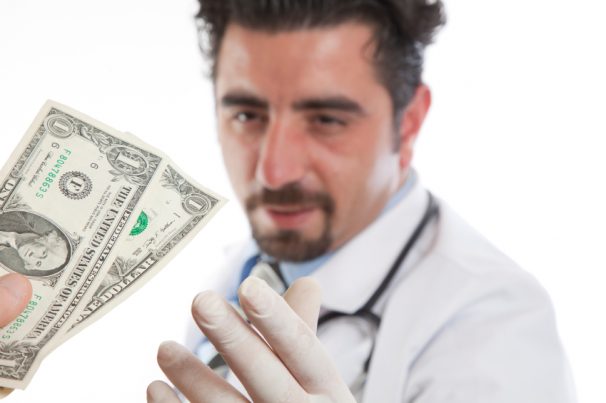 Two-thirds of Americans are currently in the care of a physician that is being paid by a drug company, and they may not even realize it. A study conducted by Genevieve Pham-Kanter, Ph.D., surveyed more than 3,500 adults and linked their doctors to data from Open Payments, a government website that reports pharmaceutical and device industry payments to physicians.

The results of the study revealed that about 65% of the people surveyed had visited a doctor within the past year that had received payments or gifts from pharmaceutical or medical device companies. Even more shocking is that only 5% knew that their doctors had been given these incentives. Patients who were visiting an orthopedic surgeon or OBGYN doctor were shown to have the highest percentage of being under the care of a physician receiving some kind of incentive. Pham-Kanter said, “Patients should be aware of the incentives that their physicians face that may lead them to not always act in their patients’ best interest. And the more informed patients are about their providers and options for care, the better decisions they can make.” (RELATED: Get all the news Google is trying to hide from you at Censored.news)

The Open Payments website is a federal program that collects information about payments drug and device companies make to physicians in the form of travel, research, gifts, speaking fees, and meals. It also includes any ownership interests that doctors or their immediate family members may have in these companies as well. While most physicians receive payments averaging about $193, it does add up over time. Between August 2013 to December 2015 Genetech, Inc. ,the maker of drugs such as the allergy drug Xolair and anti-viral drug Tamiflu, made payments totaling $727 million to doctors and research hospitals.

Doctors have long disputed claims that the payments they receive from pharmaceutical companies have any relationship to how they prescribe drugs. An analysis created by ProPublica in 2016, however, found that doctors who received money or even just a meal from drug and device makers prescribed a higher percentage of brand-name drugs overall than doctors who didn’t. According to ProPublica, the analysis doesn’t prove industry payments sway doctors to prescribe particular drugs or even a particular company’s drugs, but it does show that payments are associated with an approach to prescribing that in the end benefits pharmaceutical companies’ bottom line.

Transparency sites like Open Payments not only keep patients informed, but it may influence physicians to think twice before taking incentives. Pham-Kanter surmised that even if patients don’t know about the information, physicians could be more likely to shy away from taking industry payments if they know the information will be made public. She says “Transparency can act as a deterrent for doctors to refrain from behaviors that reflect badly on them and are also not good for their patients.”