Why is the FDA under a gag order to hide details about a massive cheese recall? 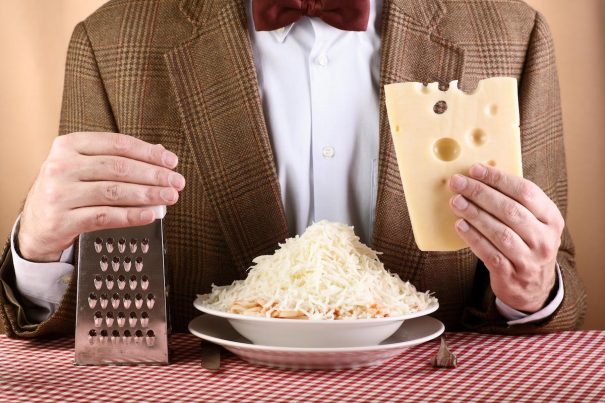 Sargento’s recall on a number of their cheese products for possible Listeria contamination has been making major headlines. But what you may not have heard is that an additional 130 kinds of cheese and products containing cheese are also under recall — for containing the same Listeria-contaminated cheese produced by Deutsch Kase Haus LLC.

A number of different brands are involved: besides Sargento, some other brands affected are Sara Lee, Saputo, Dutch Valley, and Guggisberg. A variety of store-brand products by Meijer, H-E-B, Albertsons and other major retailers are also affected by the recall.

Some of the affected brands have been quite forthcoming about what products of theirs have likely been affected and what they are recalling. These companies should no doubt be applauded for their transparency.

The mass recall of over 100 different types of cheese began in early February after a random test of Amish Classics cheeses that Tennessee inspectors had collected from a retailer tested positive for Listeria monocytogenes. The cheese was manufactured by Deutsch Kase Haus LLC, as are many other cheese varieties. This prompted Tennessee officials to issue a consumer alert.

The United States Food And Drug Administration is reportedly investigating the situation in a number of states, along with local officials. However, a clause in federal code prevents the FDA from telling the public what companies purchased cheese from Deutsch Kase Haus; such details are apparently considered “confidential corporate information.”

In other words, unless all of the affected brands come forward — or Deutsch Kase Haus publicizes a list of all the companies to which they supplied cheese — there is no real way for the public to know what cheeses and products were affected by the Listeria contamination, in total. Worse still, because of this “clause,” which many are likening to a gag order, there is no de facto list of all the recalled products to turn to for answers. With at least 130 products affected by the recall, you can imagine how difficult it would be for anyone other than the manufacturer to compile that information.

The idea that the FDA is bound by corporate interests is really nothing new, but this latest development just goes to show how far the federal agency will go to protect corporations before people.  It is truly ironic that the government agency cannot tell the public what companies have purchased contaminated cheese, given that the organization describes itself as a protector of public health. The FDA’s very own website declares that they are fundamentally responsible for “[p]rotecting the public health by assuring that foods (except for meat from livestock, poultry and some egg products which are regulated by the U.S. Department of Agriculture) are safe, wholesome, sanitary and properly labeled;…”

What good does it do to tell the public, “Some types of cheese have been contaminated with a disease-causing pathogen, but we can’t tell you what brands of cheese are affected because it goes against corporate interests.” Their promise of investigation means little when there are steps they could be taking right now to prevent infection simply by telling the public what foods may not be safe.

While Listeria is a serious food-borne illness, one has to wonder: if the food were contaminated with something more recognizable as a threat, would the agency still be singing the same tune? How would they continue to justify their inaction and indifference then?

As an agency, the FDA has been scrutinized for their failure to protect the people of the country it allegedly exists to serve for many years. Recently, in 2015, it came to light that there was a major legal loophole that actually allowed food companies to put new additives in food without government review. How? As long as the industry itself declares the ingredient safe, there is no need for FDA approval — via a decades-old law that allows food manufacturers to skip over the federal regulation process. There are thousands of potentially toxic ingredients that are added to food with little to no supervision from the FDA.

Who are they really serving? It surely isn’t the public.